This project was a combination of many of the example projects here and set up for a trade show.

Goals are defined below:

To make this program run we had to do a few things. First I wanted the positions and sounds to be “random” so I used the “random” function from the “randint” library.

Next we needed to load the “mpg321” package so we can play .mp3 sounds

The program waits for user input from the console and will move to a random position, play a random sound (for this project I found robot voice clips from movies where the robots were making fun of humans… ) and the triggers the GPIO pin on the pi to start the PiBooth routines.

This project was really fun and had a great interaction with the show crowd. PiBooth does require a twitter API call so be sure to follow the rules with that or risk getting shut down part way through your day like we did…

User-contributed programs that work with the Tormach Robot Programming Language

Hey Joe - welcome to the Tormach user forums! Very cool setup for a maker fair - I bet it was a hit. How long did it take you to figure everything out? What were the hard parts? What camera did you attach to the ZA6, and if you had to 3D print an adaptor do you mind sharing the STL?

Cool stuff. Do you have a video?

Hey guys,
Here is the STL for the camera mount. Its a simple plate that allows for a 1/4-20 threaded knob or bolt to pass through and connect the camera. For the tradeshow I used a Logitech c920 camera that has a tripod bolt in the base already.

Here is some video of it in operation. I got so caught up in the show I forgot to take any pictures or video myself. 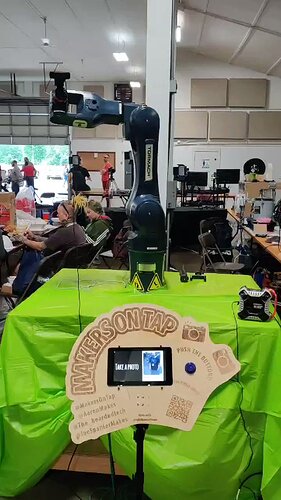 As far as figuring everything out it took me a couple nights to get all the different pieces working, getting the twitter api working was probably the hardest part. Overall it was a very easy project to put together and turned out to be extremely robust.

One part that was interesting was we needed internet for both the twitter api upload but also for the package install we needed to do. This is something that people should remember as they are setting up processes. It tripped me up at the beginning because the internet on the main day was extremely spotty, if we had to restart the system it would sometimes crash because it was not able to get the packages.

@joe.spanier We fixed Discourse so it allows you to directly attach STL files to forum threads. I’m linking your tripod here for posterity (in case your Google drive goes away).