I’ve been chipping away at getting my ZA-6 to do machine tending on my Tormach 1100S3 for a while now. It’s been a super interesting journey as I sort of went from being a complete robot n00b to someone who is moderately competent at running the ZA-6 and now has a working machine tending set-up on my 1100.

There’s been a few places I’ve been discussing this around the Internet, but seems like this is probably the right home for the conversation. If anyone is considering trying to tend a CNC machine with a ZA-6, I’m happy to share what I’ve learned along the way.

The starting point is probably this video that shows everything in action, and then you can work backward from that to see what I was up to along the way:

Feel free to ask any questions. Happy to help.

@bigtchopshop Thanks for sharing all this! I’m really excited to see you blazing this trail.

I saw a number of VersaBuilt products in use at IMTS yesterday. This machine demo was using two Multigrip vises (same as in the above video) to do 1rst op/2nd op work on flat aluminum bar: 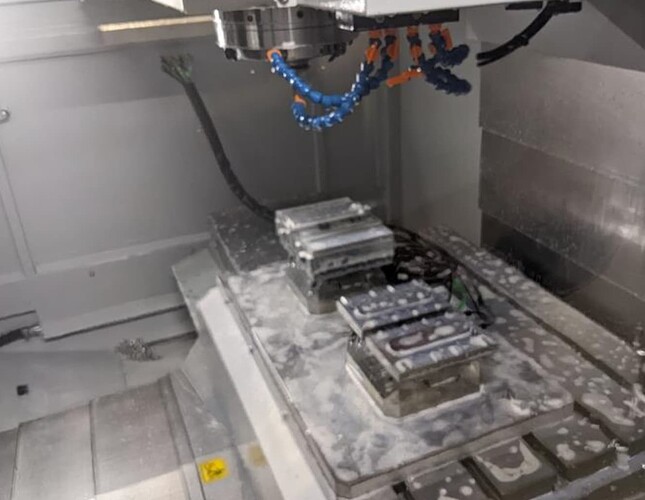 Is there any 2 op work in your future?

Awesome! Yes. The Op2 workflow on VersaBuilt is particularly interesting because as far as I have seen, almost everyone else defers to pallets/fixtures for Op2. Although the reasons for deferring make sense to me knowing what I know now, it would still be way better to have the robot able to do that Op1 → Op2 transfer, so I think Versabuilt has that dialled.

I’m actually going through this exact thinking right now and there are arguments for both approaches (Versabuilt Op2 vs. Pallet/Fixture Op2). And. realistically, the answer is you probably need both depending on the mix of work. I am a job shopper, so it’s always high mix / low qty.

This is my current thinking:

Pros of a Pallet Based Approach

Cons of a Pallet Based Approach

Somewhat apples and oranges though depending on the use case. If you’ve got 100 of the same parts to run, that looks different than running 10 batches of 10 parts. So, that’s sort of why I say there may not be an alternative to being able to run things both ways.

One thing that would potentially be kind of neat would be to machine the mechanical interface from a set of Versabuilt Jaws into the side of a pallet… so that you could also pick up pallets with the VersaBuilt jaws and be able to mix and match if you had both a VersaBuilt vise, and some sort of zero point pallet base on your table.