Anyone modify the Tormach fusion post to eliminate the G53 position? I only want the machine to go to G30 at the end of the part and selecting either g28 or g30 does not stop the post processor from writing g53 position.

Theres not a post property for it at all? Fairly certain that there is one for mills.

I’m pretty sure that the old post (that I didn’t download) worked fine. There are 2 check boxes for G28 and G30 z5422 neither one stops the post from writing G53 also. I am not excluding the probability that I am just flat out doing something dumb.

OK I did some experimenting. It only posts the G53 code when I am using machine configuration. 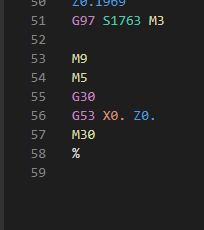