Would like to see the prior commands manually typed in the GCode area. Since you go into a different “mode” when in GCode mode, might as well show the list of prior commands in a clickable list, much like the MDI history in LinuxCNC. 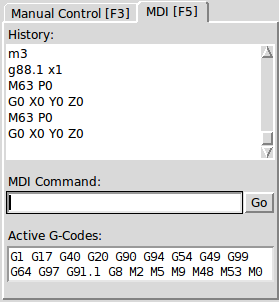 I have not been using PathPilot for very long (less than a month), but I seem to use two commands quite frequently:
G0Z0 and G0X0Y0

Life is going to suck if I accidentally pick the wrong one at the wrong time.

But, I find myself typically selecting one or the other in my normal work flow.

But, this also came up when trying to go to the center of the table during the installation. I must have typed in that “center” command so many times, but did not know of the “up arrow” option until much later.